Dutton: No concerns over intra-team battles

Dutton: No concerns over intra-team battles 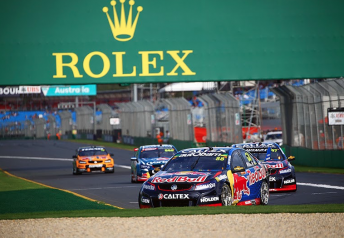 For the first time since it expanded to a three car outfit, the team’s drivers Jamie Whincup, Shane van Gisbergen and Craig Lowndes went head-to-head for victories at Albert Park.

Battles between the trio proved to be hard fought but the racing was kept clean as Triple Eight took victory in each of the four races.

Boasting a formidable record at Symmons Plains having won the previous six races, the squad’s trio are expected to be well in the fight for top honours once again.

Dutton admitted watching the trio battle at Albert Park was nerve wracking but has no concerns it will cause issues this weekend or during the season.

While Triple Eight’s intra-team dices have been largely clean, the tight Tasmanian circuit was the venue for the most high profile clash in recent times, when Whincup and Lowndes collided while fighting for victory in 2014.

“I’d be lying if I said I wasn’t worried (when watching them race hard and close at the Grand Prix),” Dutton told Speedcafe.com.

“We trust them immensely. The orders are pretty simple and they are standard Triple Eight orders which we have had from the beginning.

“They can settle it on the track. We will work off it to give them the best machines as possible.

“It (the Whincup/Lowndes clash) was a one-off I don’t think it was anything to do with Symmons.

“It was just unfortunate. There is no reason to think that something like that is going to happen.

“But if we get everything right then we have three cars to worry about but it is a very good problem to be worrying about.”

Likely to resume its impressive form at Symmons Plains, the team is eyeing another accolade with the honour of Holden Motorsport’s 500th Australian Touring Car/V8 Supercar championship race win on offer.

“It would be excellent. Milestones and things like that, I’m not going to lie, I love them,” added Dutton.

“They are fantastic and excellent to be a part of. As a team you are over the moon with any win or podium but when you are ticking off some milestones it does make it a little bit sweeter.

“It (Symmons Plains) has been a pretty good stomping ground for us in the past.

“We think we know what it takes (to be successful at Symmons Plains) but everyone always closes the gaps year in year out, so you can’t be complacent and expect you are going to have any pace over anyone else.”

Alongside the opportunity to claim a memorable milestone for Holden, Whincup could also become only the second driver to secure 100 V8 Supercars Championship race wins this weekend.

After victory in the opening race of the season at the Clipsal 500, the six-time champion heads to Symmons Plains with 98 wins on the board as he bids to join Lowndes, who racked up a century of wins last year.