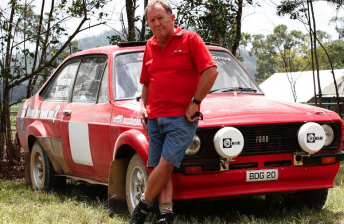 Five-time Australian rally champion Ross Dunkerton will make a competitive return to the sport with an entry in the opening round of the Australian Rally Championship next month.

Dunkerton will team up with his wife Lisa in a Maximum Motorsport prepared Subaru WRX STi for the Quit Forrest Rally in Western Australia in what will be his first rally for more than 10 years.

Following a career which saw him claim 111 event wins including two Asia Pacific titles in 1990 and 1992, Dunkerton announced his retirement from rallying in 1994.

However, he was lured back into competition in 2005 by his former team Ralliart to drive a Mitsubishi Magna AWD in the Australian Championship division of the Australian Cup, winning all five events, íncluding the Forest Rally.

The 70-year-old, who won Australian tittles from 1975-77 alongside 1979 and 1983 triumphs, is looking forward to returning to competition.

“It’s been 22 years since I have driven a fast four wheel drive car on a loose surface and for the last eight years I have been out in the bush behind a camera filming the championship,” said Dunkerton, who was recently inducted into the Australian Motor Sport Hall of Fame.

“With no commitment to do that this year I had the sudden urge to get out there for at least one event and I’ve turned to my good friend and master car preparer Rob Herridge of Maximum Motorsport to supply me a car.

“I hope to see some familiar faces and old supporters out in the forests next month. I might not be as quick as they used to see of me, but I’ll  be doing my best.”

The Quit Forrest Rally is scheduled from April 22-24.