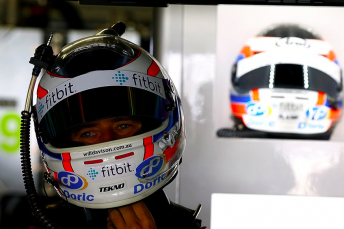 Will Davison admits he was caught off guard by Steve Hallam’s sudden departure from Tekno Autosports, but insists he’s unconcerned by the development.

The highly experienced Hallam has guided Tekno since the end of 2013 and played a role in Davison’s high profile off-season switch from Erebus Motorsport.

Englishman Hallam has, however, elected to return to the United States, where he will next week start a management position at Toyota Racing Developments.

Informed of the move on the eve of Easter, Davison says Hallam’s decision was a shock for the whole team.

“I was a little bit shocked, I certainly didn’t see it coming,” Davison told Speedcafe.com.

“At the end of the day it probably doesn’t affect me as much as some of the other guys in the team because I’d only done two events here.

“The team were a little bit more shocked than me. They’ve built up a great relationship over the past few years.

“It’s disappointing to lose him but I’m not going to dwell on it at all. I’m confident it’s not a huge issue, because all of the key parts that make Tekno are unchanged.

“Steve’s style is to have everything very formal and structured and be diligent in every detail and you can see that’s rubbed off on all of the guys in there.

“That’s what’s really impressed me during my time with the team.

“So it’s certainly a loss, but more so to V8 Supercars than anything. He’s highly respected globally and a good guy to have in our series.” 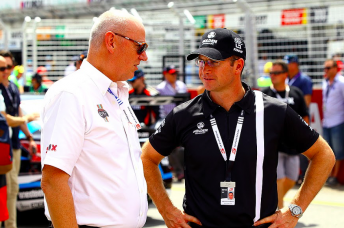 Steve Hallam at the Clipsal 500 with Holden’s Simon McNamara

Despite mechanical issues hampering his single pre-season test day, Davison enjoyed a solid start to his tenure with Tekno at the Clipsal 500 and heads to Symmons Plains 15th in the standings.

A crash in practice saw him buried in the mid-pack last time out at Albert Park, but lessons learnt at the venue have the 33-year-old highly encouraged ahead of the trip to Tasmania.

“This weekend is a key one to start drawing conclusions as to where I’m at,” said Davison.

“We went into Clipsal still adjusting seats and pedals and things like that, let alone driving style.

“So to be honest I couldn’t believe we were 10th on the grid there when the car still felt very foreign.

“My error at the grand prix was very costly in terms of results there, but we made the most of the opportunity to understand the car.

“We made a massive amount of changes across every single race.

While Davison has access to data from the three Triple Eight Holdens, specification differences between the cars mean that direct comparisons can’t always be made.

“They’re doing a lot of different things and there are some differences in the cars as well, so we’re looking at that and also trying to find our own path,” Davison continued.

“I’ve got high expectations that we can take it up a notch this weekend. I think we should be quite competitive.

“The car feels like it brakes pretty well and the engine is strong, so bring it on.”

Next Story Dutton: No concerns over intra-team battles