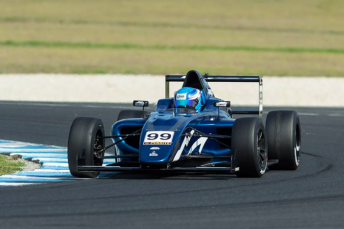 The CAMS Jayco Australian Formula 4 Championship will kick off the new season with a nine car field at Symmons Plains this weekend.

As previously reported, the junior single seater series had been aiming to secure a double figure grid for the season opener but has struggled to attract drivers in the off-season.

This comes after organisers CAMS reduced fees to contest the series, while also introducing $50,000 scholarships for drivers aged 23 and under.

As a result, nine cars have been confirmed for this weekend’s season opener which is four below the entry for the inaugural round at Townsville last July.

The field is however boosted by the late addition of Declan Fraser, which will see AGI Sport run three cars this year.

The Queenslander, who will step up from Karts, will join Jack Smith and Nick Rowe, who is one of three drivers to return to the category this year.

Five of last year’s crop have since graduated to championships in Europe and America as they look to expand their single seater careers.

After guiding Jordan Lloyd to the title last year, Team BRM will once again enter a four car effort headed by Will Brown, who finished third in the championship last year.

The championship will welcome a new team in Junior Racing Developments which will field a car for 15-year-old karting graduate Tyler Everingham.

A second car has been purchased but the team is yet to fill the position.

Jordan McGregor, who ran in selected rounds last year, completes the field for Tasmania with the Queenslander running an entry under the Jordan McGregor Motorsport banner.

The entry was to be assisted by Harvest Motorsport but the team has since pulled its support.