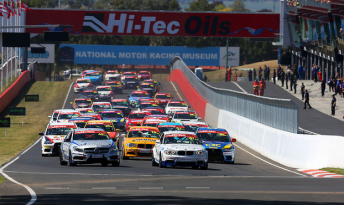 The Bathurst 6 Hour will retain its Easter date next year

The Bathurst 6 Hour has confirmed its 2017 date alongside a contract extension with title sponsors Hi-Tec Oils.

The inaugural event held last weekend proved to be a success with 50 production cars doing battle in the Mount Panorama endurance.

Following Chaz Mostert and Nathan Morcom’s impressive victory, organisers have moved quickly to confirm the event will retain its slot on the bill at the Bathurst Motor Festival next year.

As Easter falls later next year the event will be held from April 14-16 with the race set to start 30 minutes earlier with a confirmed start time of 1130 local time.

The event has also tied up a new three-year naming rights deal with Hi-Tec Oils.

“The time was right to reintroduce an endurance race for production cars at Mount Panorama and we were very pleased with the reception we received this year,” said event director James O’Brien.

“We now have a three-year platform on which to build this race thanks to the support of George (Gambino) and his team at Hi-Tec Oils and the Bathurst Regional Council.

“There are a lot of manufacturers who produce vehicles that can compete in this race and hopefully this can be a catalyst to boost production car racing nationally.

“Easter and racing at Mount Panorama are synonymous. The Hi-Tec Oils Bathurst 6 Hour can now take its place alongside the Bathurst 1000 and Bathurst 12 Hour.”

A three-day crowd of 16,151 was recorded over the weekend while 300 competitors competed across six categories.