Having topped the times in testing, Randle headed into the weekend earmarked as one of the favourites.

The Victorian continued to show his class by going fastest in Friday’s two practice sessions.

However, a brake issue developed throughout the weekend which saw him unable to repeat the pace shown on Good Friday.

Randle, who started from seventh on the grid, aquaplaned off the road in the opening race as wet weather engulfed the Norfolk circuit. The Douglas Motorsport driver surged from the back of the grid to finish ninth in race two before coming home in fifth in the final race, netting him 10th in the championship with 32 points.

The Darwin teenager survived the slippery track surface to finish 11th in Race 1 before following those results up with a seventh and a ninth in the remaining two races.

The BRDC British F3 Championship continues with a visit to the Brands Hatch Grand Prix circuit from April 16-17. 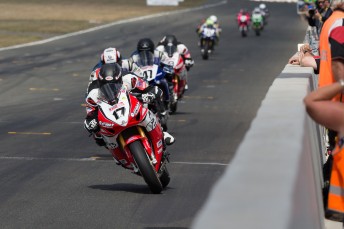 Troy Herfoss and Wayne Maxwell took victory in the second round of the Australian Superbike Championship at Wakefield Park.

After witnessing the race restart three times due to earlier accidents, the Honda raider came through to take the flag from team-mate and substitute rider Ant West, while Cru Halliday claimed the final spot on the podium.

Title contenders Maxwell and Glenn Allerton failed to the finish the opening race with the latter retiring after briefly holding the lead.

Maxwell redeemed himself in the second race with the Yamaha rider taking the win from West and Allerton, with Herfoss winning the round in fourth.

Herfoss now leads the championship standings by two points from Glenn Allerton with Maxwell in third.

The championship continues at Sydney Motorsport Park from April 16-17.