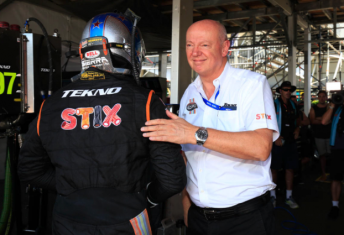 Speedcafe.com understands that the Englishman has landed a new motorsport role with Toyota in America which will see him leave the Gold Coast-based Tekno squad, having led the operation since 2014.

Hallam is regarded as one of the most experienced in the V8 Supercars paddock having enjoyed spells in Formula 1 with McLaren, where he spent 18 years, before moving to NASCAR’s Michael Waltrip Racing in 2009.

A managing director position at the Holden Racing Team brought him to V8 Supercars in 2012.

Upon leaving the HRT at the end of 2013, Hallam replaced outgoing team manager Bruce Jenkins at Tekno.

During his time at the team he oversaw seven V8 Supercars race wins.

Alongside his job at Tekno, the 63-year-old has also played an influential role in the formation of V8 Supercars’ Gen2 guidelines set to be introduced from next season.

He also helped Tekno sew up a partnership with McLaren GT which saw the team run two entries for the manufacturer at this year’s Bathurst 12 Hour, resulting in a victory for the #59 car.

The team has continued its association with McLaren in the Australian GT Championship this year.

Following the publication of this story Hallam has since confirmed his departure from the team.

“It has been, for me, an absolute pleasure to work with those guys and girls, they really are super people,” said Hallam.

“I’ve been presented with one of those opportunities that is very hard to turn down.”