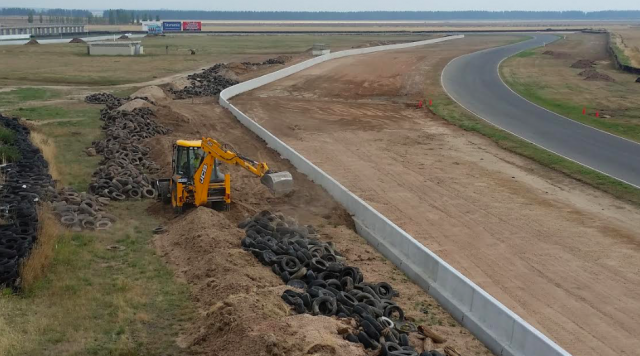 The V8 Supercars Championship will be greeted by a new look Symmons Plains Raceway this week following extensive recent upgrades to the iconic venue.

Symmons Plains has been largely a construction zone since late last year thanks to a $2 million state government grant to lift safety and presentation standards at the circuit.

Safety work has included the refurbishment of all of the 2.41km layout’s gravel traps, with 5,000 tonnes of new gravel put in to arrest out of control cars and bikes.

A kilometre of earth-filled tyre walls around the inside of the circuit have also been replaced by concrete, running from partway down the back straight all the way around to Turn 2.

Other changes include renovations to the control tower, a new medical centre, new concrete areas in the main and support paddocks and a fresh fuel storage facility.

The extent of the project saw the circuit shut throughout most of December and January, with only limited track days taking place in the subsequent weeks ahead of the arrival of the V8s.

Peter Killick, a director at non-for-profit circuit management Motorsports Tasmania, says his team is proud to have lifted standards at the 56 year-old venue.

“The place looks amazing,” Killick told Speedcafe.com of the track, which is located 30 kilometres south of Launceston.

“It’s completely different. V8 Supercars and CAMS are happy, so we’re really excited about the race meeting ahead.

“Without the support of the government we wouldn’t be able to do this sort of work.

“There are still some things we’d like to do ahead of next year, but the government enabled us to bring the funding forward to give it a big hit now and make a big impact.”

Future projects include a desire to add camping facilities, which can also be utilised for non-motorsport events.

There remains no immediate plans, however, to resurface the circuit, despite the current tarmac being over 10 years old.

“I think it’s still got another five years left in it before it needs to be done again.”

While government funding has enabled the Symmons Plains refurbishment to take place, Motorsports Tasmania is busy fundraising for a resurface of its other venue, Baskerville.

The Hobart circuit is due to receive a full reseal later this year, provided that the balance of the $800,000 required can be found.

Baskerville is used solely for local racing, while Symmons Plains holds a contract to host the V8 Supercars through until at least 2019.