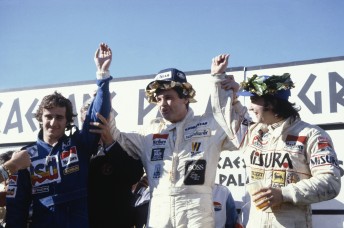 Formula 1 could be heading to Las Vegas after the sport’s boss Bernie Ecclestone revealed a contract has been agreed with event organisers.

In an interview with British newspaper the Mail on Sunday, Ecclestone claims Las Vegas organisers, “have a contract” and that a return to Vegas “would be super.”

Las Vegas hosted an F1 race from 1981-1982 on a temporary street circuit in the grounds of Caesars Palace casino.

America already hosts the United States Grand Prix at Austin’s Circuit of the Americas but a second race in the region has been earmarked for some time.

A street race to be held in New Jersey was touted but this has since dropped off the radar following a lack of funding.

However, a return to Las Vegas would see F1 revisit a city which saw Australian Alan Jones claim his final F1 win in the inaugural Caesars Palace Grand Prix in 1981.

The race disappeared from the F1 calendar after Michele Alboreto’s victory in 1982, having attracted small crowds.

Meanwhile, Ecclestone also went on to say that the Italian Grand Prix at Monza will go ahead this year but revealed it could be scrapped in the near future.

“Monza has got a contract for this year so it is going to go ahead,” added Ecclestone.

“Next year is the question mark. I don’t think we have to have an Italian Grand Prix. Somebody once told me a funny thing that you couldn’t have Formula 1 without a race in France but we do.”