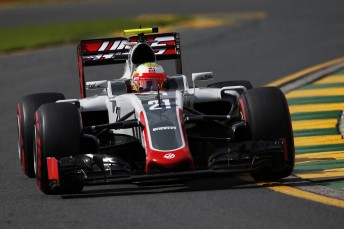 Esteban Gutierrez will use a a spare chassis at Bahrain

Esteban Gutierrez will utilise a new chassis for this weekend’s Bahrain Grand Prix following his crash with Fernando Alonso at Albert Park.

The Haas F1 driver was involved in a collision with the McLaren early in the Australian Grand Prix which pitched Alonso into a spectacular series of rolls forcing the duo into early retirement.

An inspection of Gutierrez’s chassis rendered it difficult to repair in time for the second round of the season, which has seen the new American outfit build up a spare car for the Mexican driver.

Team Principal Guenther Steiner is hopeful the damaged chassis will be repaired and sent to Bahrain where it will be used as a spare, as the team battles to ensure it has enough parts in stock to service both its cars.

“Some of the parts, for example the chassis, were sent back to Europe to be checked and fixed because we can’t do it onsite in Bahrain,” said Steiner.

“We have enough spare parts to build up another chassis, so we will use that.

“Then the chassis that is repaired will be sent to Bahrain via air to serve as our spare.

“The guys will have to work day and night to get to Bahrain, but it’s all doable.

“Our spare quantity is down, but we have enough to get going again, so we will just keep on working.”

After Gutierrez’s team-mate Romain Grosjean scored an incredible sixth on the team’s F1 debut in Australia, Steiner says it is important to keep the team’s expectations in check this weekend.

“I think our plan is working, but we won’t finish sixth every weekend, so we need to be careful with our expectations,” added Steiner.

“I think we showed that you can start a new team and end up in the midfield.

“We were not last in Australia, which was one of our goals, and I don’t think we will be last this year. How far we’ve come is a sign that our plan is working.”