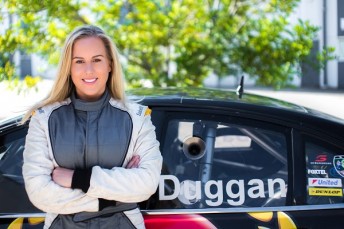 Emily Duggan will make her V8 Supercar racing debut after completing a deal to contest the Kumho Tyres V8 Touring Car Series at Sandown this weekend.

The Sydney driver will make the leap from competing in the New South Wales Hyundai Excel Series to racing in V8 Supercars’ third tier with Rsport Race Engineering.

Duggan, the first female to race in the series, will drive an ex-Kelly Racing VE Commodore backed by Penrite and caradvice.com.au.

She will become the third female to race a V8 Supercar this year following Dunlop Series regulars Renee Gracie and Chelsea Angelo.

“My dream has always been to race V8 Supercars and I can hardly believe it’s going to become a reality for me this weekend,” said Duggan.

“I attended some CAMS events and did some research, and the Excel Series seemed to be an ideal place to start my career.

“Because the cars are so evenly matched, racing in the Excel Series has taught me a lot about race-craft and how to overtake.

“It’s also allowed me to forge contacts and relationships in the motorsport industry including my partnerships with Penrite and Car Advice, which will be invaluable as I take this next step.

“I have been doing everything I can to prepare myself for the transition, including a lot of simulator work and studying in-car footage and data.

“Mark Robinson from R-Sport Race Engineering has been extremely supportive and he wants me to succeed.”

Duggan will feature in an 18 car entry confirmed for the CAMS Shannons Nationals season opener at Sandown which begins on Friday.