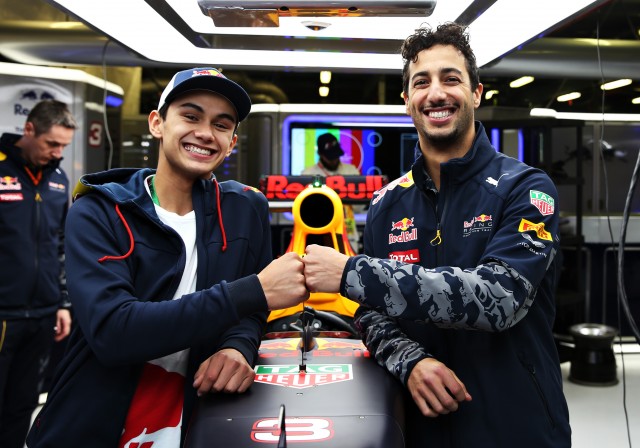 Daniel Ricciardo has offered Australia’s aspiring single seater stars valuable advice as they embark on campaigns in Europe and America.

The Red Bull Formula 1 star has been keeping a close eye on the talent pool coming through Australia having followed the same path on his way up the motorsport ladder in Asia and Europe before arriving in F1.

This year Australia will be well represented in junior single seater categories with five drivers who competed in the inaugural CAMS Australian Formula 4 Championship landing drives in Europe and America.

CAMS Australian F4 champion Jordan Lloyd has already made an impressive start to his USF2000 campaign by scoring a win at the St Petersburg opener.

Tasmanian Alex Peroni is also starting to build a name for himself in the hotly contested Formula Renault 2.0 series.

Aware of the many pitfalls that can arise for young drivers living away from home while trying to forge a career in the sport, Ricciardo believes hard work and focus is the best advice he can give.

“For me don’t get distracted. That is the best advice I can give,” three-time grand prix winner Ricciardo told Speedcafe.com.

“I was super disciplined when I left home. I could have easily said ‘I’m living alone I can chase girls and go and party’, but I had the complete opposite approach.

“I figured the years of sacrifice now and missing out on a bit of fun I will eventually get back.

“Put in the hard work and don’t get sidetracked and the reward will pay off.”

Having endured an arduous journey through state level Formula Ford, Formula BMW in Asia and UK, Formula Renault 2.0, British F3 and Formula Renault 3.5, Ricciardo feels the addition of Formula 4 has made the path clearer for Australian talent.

“The steps are there for Aussie kids if they can afford to go and chase them,” added Ricciardo.

“Formula 4 is really giving them a lot more faith that can really happen the dream can come true. It is good to see. I do know the talent here in Australia.

“We are far away from Europe and America but we seem to carry a lot of talent. Hopefully we see a few more break through into F1 over the years.”