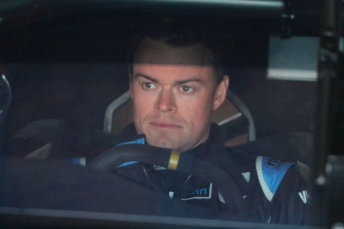 James Moffat has vowed to work harder than ever to come to grips with his Volvo S60 after struggling to match team-mate Scott McLaughlin in the season’s opening events.

While McLaughlin continued to prove a top five contender at both Adelaide and Albert Park, Moffat has endured a horror run, ending all four qualifying sessions in the 20s and finishing no better than 15th in the seven races.

The 31-year-old Moffat admits that he’s still trying to get comfortable with the car and set-ups required to get the most out of the S60.

The development of the GRM Volvo package has been spearheaded by McLaughlin and his race engineer Richard Hollway since it first hit the track at the end of 2013.

“It’s surprised me the difference in the cars (moving from the Nissan to the Volvo). I underestimated that a little bit,” Moffat told Speedcafe.com.

“Based on the data Scotty and I do drive quite differently and when you’ve driven a certain technique pretty much your whole V8 career it’s hard to just change how you drive.

“You don’t just decide you’re going to write left-handed one day if you’ve always done it with the right.

“We went to Clipsal down the same (set-up) path as Scotty and that wasn’t working for us, so we went a little bit differently over the weekend in terms of set-up and a few other things.

“At the GP we did some set-up stuff that was a bit different to #33 (McLaughlin) to see if we could get a bit of a direction out of that towards my style and technique.

“I can’t say that we hit on what we needed to, so it’s going to be a work in progress.” Moffat battles back in the pack at the AGP

Moffat’s previous team switch came at the end of 2012, when he moved from Ford squad Dick Johnson Racing to Nissan Motorsport as the Car of the Future was being introduced.

Although the COTF was a distinct change for all drivers due largely to its independent rear suspension, Moffat says the fact that the DJR Ford and Nissan used the same base Triple Eight customer front-end was a major help.

“From the Nissan to the GRM car is a different front-end and the set-up window seems quite small with this car,” he explained.

“It’s been a bit of a weird one for me. At the GP we felt like maybe we’d made some progress in practice, but then we got into qualifying and it was just flat-out slow.

“Driving the car, it didn’t seem like a 24th place car, but that’s where we qualified.

“I’d be lying to say that I’m not disappointed or frustrated with it, I’m both of those things.

“But I can only try and keep improving myself and working hard at it and hopefully we can start to unlock some speed and move forward.”

The next event on the calendar, Symmons Plains, looms as a daunting one for Moffat due to its heavy reliance on braking confidence.

Regardless, the son of four-time Australian Touring Car Champion Allan Moffat says he’s buoyed by the fact that he feels he has gelled well with the GRM crew amid the challenging start.

“I feel like the relationship that Manuel (Sanchez, race engineer) and I have is good and the communication is strong,” he said.

“That’s all you can do at the beginning is just to make sure that communication is there.

“From that side of things having Richard there as well, the way that he and Scotty work together is good and being able to tap into that has been a positive thing for me as well.

“That side of it is a bit more open than what I was used to in the last few years.”

Moffat scored Nissan’s only V8 Supercars race win to date at Winton in 2013, but found himself without a seat at the end of last year as the squad chased funding for its fourth car.