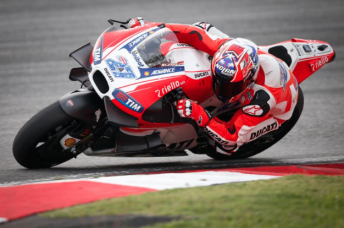 Casey Stoner was among the riders discussed to replace the injured Danilo Petrucci before Ducati elected against the idea due to the Australian’s lack of fitness.

Talk of a racing comeback for the two-time MotoGP world champion emerged once again after news that Petrucci will miss the next two races for Pramac Ducati through injury.

Pramac Ducati announced last week that Ducati test rider Michele Pirro will fill in for the Italian after Ducati considered Stoner was not ready to make his racing return.

Stoner, who rejoined Ducati as a test rider this year, has enjoyed two official test outings with the Italian manufacturer, with his latest arriving last week in Qatar.

“Yes, and we’ve reached the conclusion that it was not sensible to face a race,” Ducati team manager Gigi Dall’Igna told Italian newspaper Gazzetta dello Sport, when asked if Stoner was considered as a replacement for Petrucci.

“Physically he is not able to face a race at the moment – therefore neither two consecutive races.

“He rode again on a MotoGP bike only in Malaysia, after six months without riding.

“Then he has also had some physical problems, he still lacks strength. It wouldn’t make any sense to enter him in a race.”

However, Dall’Igna refused to rule out a possible racing return for Stoner later in the year, but reiterated that testing was the Australian’s priority.

“Casey is a test rider, and I’m interested in him testing the bike and the new components,” he  added.

“Mid-way through the season, we’ll see.”

Next Story Marquez on pole as Redding suffers tyre scare