David Sera steps up the pace at Puckapunyal 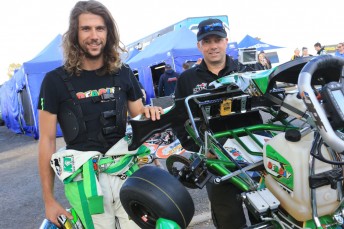 Australia’s most prolific karting Champion, David Sera has been the pace-setter in opening heat racing at the second round of the Australian Kart Championship, presented by Jayco and Castrol EDGE in Puckapunyal (VIC).

The 17-time Australian Champion established the quickest time in the elite KZ2 Gearbox category qualifying before taking his Deadly Kart to comfortable victories in both heat races.

Kyle Ensbey, who withdrew from the opening event last month with an abdominal injury, qualified second and finished second in the second heat – looking good on his return to the wheel.

Round one TaG winner, Brendan Nelson scored two wins in his category, however is being kept honest by New South Wales-based Joshua Car, who stepped into the senior ranks this year.

Car is racing in two categories this weekend and has tasted success with the X30 motor – battling with defending Champion, Daniel Rochford and Queenslander Adam Mercer.

Meanwhile, 14-year-old Cory Arnett has had a great start to his senior racing career, securing a race win in the KA1 category,  he shared his wins with current Australian Champion in the category Liam McLellan, who drives for James’s Courtney’s JC Kart team with backing from Holden.

Local drivers Jordan Nicolaou and Cody Donald have been battling for honours in KA4 Senior, whilst Tasmanian Tate Frost and Benito Montalbano have been the pace of KA4 Junior, meantime Kobi Williams and Dominic Attard have been impressive in Cadet 12 and Cadet 9 respectively.

Competition continues on Sunday with another round of heats and the second round Championship finals.