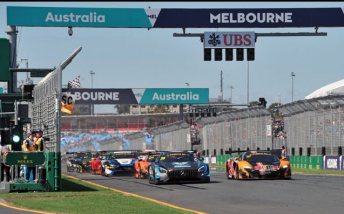 Australian GT will review a return visit to the Australian Grand Prix next year following a chaotic meeting at Albert Park.

The championship attracted criticism from drivers, teams and fans following a controversial race format for its return to the event for the first time since 2010.

A complex race format saw seeding time penalties added to each driver’s race time after the chequered flag due to the absence of compulsory pitstops.

The format was brought further into the spotlight when two of the races ended under the Safety Car which saw results change dramatically.

On the road winners in Race 3 and Race 4 Andrea Montermini and Matt Solomon were eventually classified in 14th and 22nd positions.

Reflecting on the weekend championship owner Tony Quinn admits the format did not deliver the results required, confirming that the series will consider its options for next year’s calendar.

“I guess we as a championship have to decide whether it suits our format to be quite honest,” Quinn told Speedcafe.com.

“One of the things that everybody has got to realise is those are the rules for our championship and it works really well.

“The category and the rules work perfectly well in a normal race weekend with our championship one hour races.

“I think rather blame the compulsory pitstop maybe the format of the event doesn’t suit our championship.

“We are not going to change our championship rules.

“The season has only just started and we haven’t done the grand prix for seven years, maybe we need to think about doing it again as a championship round.

“My original preference for the GTs to go to Albert Park was to have a pitstop race whether it is 40 minutes or an hour.

“I totally understand that they (F1) don’t want us driving through the pitlane.

“It is something we will discuss with the Australian Grand Prix and we will listen to feedback from the teams.

“We did not deliver the formula or the recipe in the right way. We need to be far clearer so people can understand.”

The chain reaction was caused when Tony Quinn’s Aston Martin made contact with Lago’s Lamborghini at Turn 2, which saw the Clipsal winner fire into the barriers.

Quinn was subsequently excluded from the meeting and issued with a $20,000 suspended fine for his actions.

“At the end of the day it is appropriate that I take the punishment on the chin and get on with it,” added Quinn.

“I will accept it and move on. I felt really sorry for guys that caught up in it.”

Quinn’s fine and event exclusion is the second for the category from as many rounds after Peter Hackett was fined and removed from the results of the Clipsal 500 season opener.