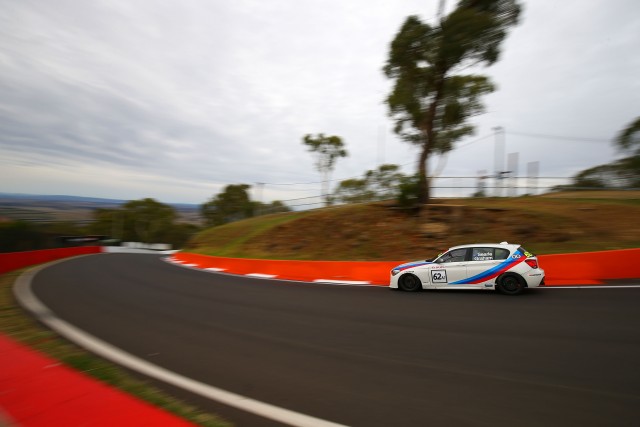 The BMW of Luke Searle and Barry Graham emerged as the early pacesetters in practice for Sunday’s inaugural Bathurst 6 Hour.

The duo, driving a Class A1 BMW M135i, topped the times in both of today’s 50 minute practice sessions, with Searle’s 2:27.00s, posted in the morning’s outing, the quickest time of the day.

Searle clocked a 2:27.8s in the second session which followed a brief rain shower at Mount Panorama.

Today’s conditions seemed to suit the BMW runners with four in the top five.

Mostert hauled the now near 10-year-old BMW into fifth place on the combined times at the end of the second practice session.

Mitsubishi runners filled positions sixth through to 10th, with the lead CXC Global Racing Lancer EVO X of Dylan Thomas and Terry Nightingale the best of the bunch.

The entire 50 car grid clocked laps today ahead of Saturday’s action, which begins with another 50 minute practice session before a two-part qualifying.

Qualifying will begin with a one hour session for the entire field before a 15 minute hit out for the fastest 20 cars.

Support classes were also in action today with the new Ferrari 488 GT3 of Tony DeFelice and Benny Simonsen claiming pole position after topping both sessions in the NSW Production Sports category.

The Ford Mustangs of John Harrison and Daryl Hansen will share the second row.

A 58 car HQ Holden field took to the track for qualifying which saw Rod Raatjes scoring pole over Brett Osborn by just under 0.5 seconds.

Due to a 55 car cap on the grid this weekend three cars will miss the race but will remain on the reserves list.