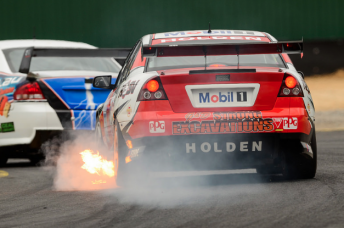 Kumho V8 Touring Cars are set for another strong season

The Kumho V8 Touring Car Series has confirmed an 18 car grid for the opening round of the season at Sandown next weekend.

This year the Shannons Nationals category has opened up the regulations to allow the VE Commodore and the FG Falcon to compete of which there are nine listed on the Sandown entry list.

Brad Jones Racing is among the teams to take advantage of the changes as it enters the championship for the first time, with an ex-Jason Bright and ex-Andrew Jones VE Commodore for karter Josh Smith.

Dunlop Series squad MW Motorsport returns to the series with the operation fielding a VE Commodore for its second-tier driver Bryce Fullwood.

Eggleston Motorsport, which guided Liam McAdam to the title last year, and RSport Engineering have both lodged entries but are yet to confirm drivers.

Likewise Image Racing is yet to reveal the identity of its second driver to partner Leigh Moran in a BF Falcon.

Meanwhile, historic racer Michael Anderson will jump behind the wheel of the ex-MW Motorsport and Ford Performance Racing BF Falcon Alex Rullo piloted to second in the series last year.

Also stepping up to the category this year is ex-Saloon Car racer David Wright as he takes over a former Jason Bright Falcon previously raced by Tony Evangelou.

Next Story BMW sets the pace in Bathurst 6 Hour practice