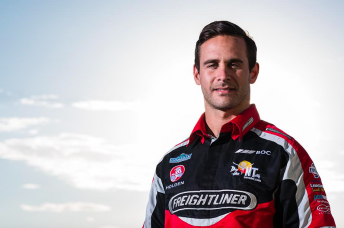 The 28-year-old Walsh is racing full-time in the Carrera Cup this season after a difficult rookie V8 Supercars campaign in 2015 with Erebus Motorsport.

Walsh slots into the BJR co-driving role previously filled by Luke Youlden, who has moved to DJR Team Penske along with the former Freightliner entry’s full-timer Fabian Coulthard.

Walsh describes the BJR drive as a big opportunity as he looks to rejoin the main series full-time next season.

“Brad and I spoke a while ago about the possibility of a drive and I certainly didn’t want to muck around looking for deals when he presented this fantastic opportunity to me,” he said.

“It’s meant I can focus on my Carrera Cup season and keep my eye in for when I get to jump aboard the Freightliner Racing Commodore.

“It’s one of the best opportunities I’ve had in V8 Supercars so far and I’m excited to see how we go.

“Tim is a really good, fast driver so I think I think everything is lining up quite well. There is a lot to look forward to.”

Slade, who sits 23rd in the championship after a rough Clipsal 500, says that Walsh’s recent V8 Supercars experience is a major plus.

“I’ve known him for a while now, back from our go karting days,” said Slade of Walsh, who spent 2011-14 in the Dunlop Series.

“I’ve always considered Ash as being a pretty fast guy and to get anyone fresh out of the V8 Supercar Championship as a co-driver the year after is quite good.

“He is competitive in the Carrera Cup field and it has been nice to see him race a few times this year already.

“Ash ticks all the boxes that we need in a co-driver.”