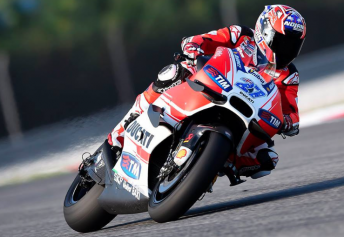 Casey Stoner enjoyed his first taste of the 2016 specification Ducati MotoGP machine following the completion of a two-day test in Qatar.

The two-time world champion tested on Monday and Tuesday at the Losail circuit following the Qatar Grand Prix, having seen his original test session abandoned following a misinterpretation of the testing rules.

After rain hampered the first day of the test, Stoner went on to log 65 laps on Tuesday aboard the same Ducati machine which finished second in last Sunday’s curtain raiser.

“We got a lot of track time, even though the conditions weren’t perfect,” said Stoner.

“There was a bit of rain, but then it was dry for the rest of the day, and there was more than enough time for us to complete the scheduled programme.

“I would have loved two days to test the bike thoroughly, but we are happy with what we did in the 65 laps.

“We tested lots of stuff, there were positives and negatives in everything, and we were quite happy with the direction we are taking.”

The Italian manufacturer did not release any lap times.