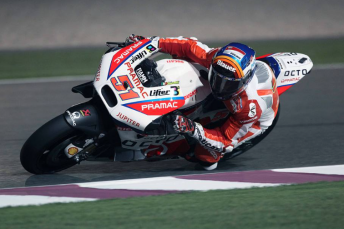 Michele Pirro will deputise for the injured Danilo Petrucci at Pramac Ducati for the second round of the MotoGP campaign in Argentina next weekend.

Ducati test rider Pirro substituted for Petrucci at the final pre-season test while the latter recovered from broken bones in his right hand sustained in a high sped testing crash at Phillip Island last month.

Petrucci made the trip to Qatar’s season opening where he competing in Friday practice before withdrawing from the meeting due to injury.

Ducati test rider Casey Stoner was touted as a possible replacement for Petrucci before quashing talk of a racing comeback.

Pramac Ducati has since said that Pirro will continue to fill in for Petrucci after Argentina if required.