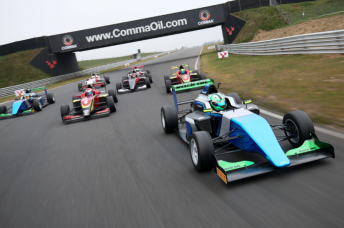 The renamed BRDC British F3 Championship will begin this weekend

The BRDC Formula 4 Championship has been renamed the BRDC British Formula 3 Championship just days ahead of this weekend’s Snetterton season opener.

The MotorSport Vision run single seater series will change its name following an agreement with the FIA and the UK motor racing governing body, the MSA.

The move will see the British F3 Championship moniker back in use after the championship folded at the end of 2014.

This year the championship will debut a new Tatuus car powered by a 230 horsepower Cosworth engine, which has been designed to achieve speeds closer to current FIA F3 machinery.

Australia’s Thomas Randle and Thomas Maxwell are set to make their European racing debuts in the category this weekend for Douglas Motorsport and Sean Walkinshaw Racing respectively.

“I am delighted that we have successfully worked with the FIA and MSA to streamline British single seater motorsport and establish a clear and logical hierarchy for both drivers and teams,” said championship boss Jonathan Palmer.

“Our much advanced 2016 BRDC F4 Tatuus Cosworth car has proved an outstanding success, being very close to the performance of British F3 in its heyday – but at less than half the budget.

“Cost effectiveness and value for money is critical to any championship’s health, and having set standards with our BRDC F4 Championship we are now doing the same at F3 level with the BRDC British F3 Championship.”

Restored as a national/regional F3 championship as part of the FIA’s drive to create a more structured pathway to European F3, the series will offer FIA super licence points.

A proposal to create an Asia Pacific regional F3 championship housed in Australia was discussed last year with CAMS currently evaluating the concept.