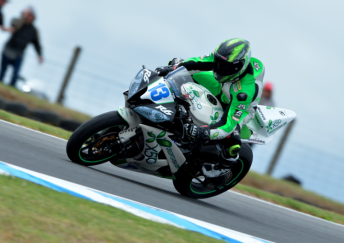 Former MotoGP rider Ant West will contest this weekend’s second round of the Australian Superbike Championship at Wakefield Park.

The 34-year-old has been called up by the Crankt Protein Honda squad to replace injured rider Jamie Stauffer, who sustained a fractured vertebra in the lead-up to this weekend’s meeting.

After scoring an impressive third place finish in the World Supersport Championship at Phillip Island last month, the Queenslander will now start his first ASBK race since 1998.

West, who competed in Moto2 and MotoGP with AB Honda last year, is without a full-time ride this season.

“I haven’t raced ASBK since 1998, so it’s going to be exciting to get back to an Australian race again this weekend,” he said.

“After my performance at Phillip Island I actually had another ASBK team approach me, however that didn’t work out, and then yesterday afternoon I got the call from Honda offering me the opportunity to race at round two, so I thought why not.

“I haven’t even had the opportunity to jump on the bike yet.

“I know that a lot of the teams have tested at Wakefield, and these guys have a lot of experience at the venue but I’m hoping I can just jump on and go fast.

“The Crankt Protein Honda Racing Team has a competitive bike, and given that I have had no time with the team, that’s one of the main reasons I said yes to the opportunity.

“It does give you confidence knowing you’re stepping on to a strong team.”