JR Hildebrand will contest the Angie’s List Grand Prix and the Indianapolis 500 in a third entry from Ed Carpenter Racing.

The 28-year-old, who hasn’t raced in IndyCar full-time since 2012, will join the team’s regular drivers Josef Newgarden and Ed Carpenter for the Indianapolis road course event from May 14, before the 100th running of the Indy 500 on May 29.

The Californian famously finished second in the 2011 edition when he collided with the wall on the final corner of the last lap while leading, which handed the win to the late Dan Wheldon.

“I’m really glad we were able to put everything together at ECR to continue our program with Preferred Freezer,” Hildebrand said.

“Especially going into this year’s 100th Running of the ‘500,’ you know everyone is bringing their absolute best to the fight.

“After the experience I’ve had over the last two years with this team, I know that we’re going to be bringing a race-winning effort ourselves. 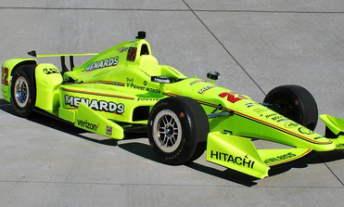 “I’m looking forward to working with Ed and Josef again and putting the PFS entries up front throughout May.”

Carpenter’s entry will be among several extra cars for the Indy 500, which includes the Australian Pirtek Team Murray entry piloted by Matthew Brabham.

Meanwhile, it has been confirmed that Menards will be the title sponsor of Penske’s #22 Simon Pagaenaud entry for there races.

A bright yellow livery will adorn the car from for the Angie’s List Grand Prix, the Indy 500 and the trip to Road America in June.