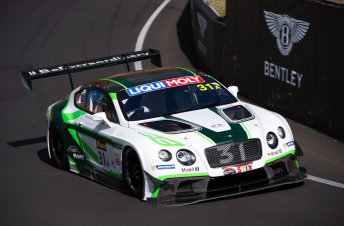 Bentley has confirmed its return to Bathurst for 2017

Bentley is the first factory team to confirm a return to the Bathurst 12 Hour for 2017.

The British brand has led the race with its Continental GT, even running one-two for a while at this year’s event, but still craves victory in the biggest GT3 race in the Asian region.

It originally announced a two-year program at Mount Panorama but is now extending it in an open-ended commitment that’s helping it sell cars in Australia.

“Yeah, we’ll be back. We have a point to prove,” Bentley’s regional manager for Asia Pacific, David Jackson, confirmed at the Australian Grand Prix.

Bentley has a big involvement at Albert Park for the second year, including the Australian preview drives – complete with helicopter shuttles to and from Sandown Park – for customers and media.

Jackson said the company has much bigger plans for Australia as it ramps up with its Bentayga, the world’s costliest SUV.

“It’s been a key part of the strategy for the past two years to engage with those people.

“The grand prix is for the luxury element and Bathurst is for the performance side.”

Racing is part of the approach and Bentley is keen to get a car into the Australian GT Championship, as well as continuing at the 12 Hour.

“We will be back again next year. It was such a sucess for us, not just on the track,” Jackson said.

Jackson does not know if it will be a two-car effort again, or with an expanded involvement, as Bentley has yet to set its racing objectives for 2017.

“I don’t know the details yet. But we are a big supporter. The team, too, is quite keen,” he said.

“We will have to wait for the release of the program later in the year.”