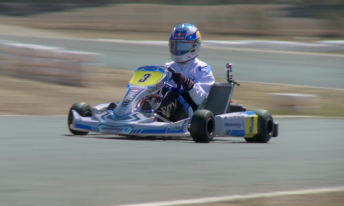 Daniel Ricciardo behind the wheel of one of his karts

A day after equaling the best finish for a local driver at the Australian Formula 1 Grand Prix, Daniel Ricciardo went back to his karting roots.

Fresh from finishing fourth at Albert Park on Sunday, the Red Bull driver jumped behind the wheel of a Ricciardo Kart at Victoria’s Puckapunyal Circuit, which will host round two of the Australian Kart Championship this weekend.

The Perth native launched his own range of karts last year with the aid of the Gold Coast-based Patrizicorse operation.

“I still had a bit of adrenaline left in me in the karts today.

“Ricciardo Kart basically started last year and the idea came in late 2014. It is something I thought was cool and to see my name on a kart is already a dream come true, as that is where I started.

“I guess it is a way of putting something back into the sport while also trying to help and motivate some young kids a chance to follow their dream.

“I have inspired a few people and a lot of Australians think its hard to get over to Europe and make it possible, but it can be done now.”

Previous Story Sixth on debut 'like a win' for Gene Haas