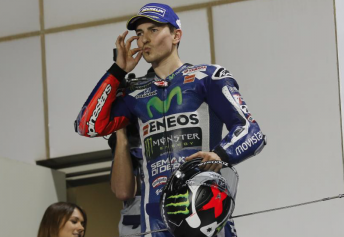 Jorge Lorenzo has kicked off his title defence with victory at the season opening Qatar MotoGP.

Lorenzo won the start as Marquez dropped back to fifth from the middle of the front row, behind Andrea Iannone, Dovizioso, and Rossi.

The two factory Ducati entries used their superior straight line speed to gobble up the Yamaha up the main straight for the first time as the top five quickly dropped Dani Pedrosa, who came under pressure from Suzuki’s Maverick Viñales.

Marquez dived under Rossi on Lap 3 of 22, before the fight for the lead resulted in Iannone crashing at Turn 13, having just been passed and re-passed by team-mate Dovizioso.

Lorenzo took the lead on Lap 9 with Dovizioso, Marquez, and Rossi close behind for the next ten laps as the riders appeared to be taking a cautious approach in their first race on the new Michelin tyres.

With the lead out to half a second Marquez moved past Dovizioso, but that only prompted Lorenzo to turn the wick up, stretching the margin to almost two seconds.

Marquez instead had to worry about those behind. Dovizioso passed the Repsol Honda Team rider to commence the final lap, and while the Spaniard dived back under #04 at the final corner, he couldn’t hold the place.

Lorenzo had meanwhile disappeared to open his 2016 account with 25 points, while Rossi never launched a serious attack for the podium.

Pedrosa and Viñales ultimately had lonely runs to fifth and sixth, Alvaro Bautista won a late-race battle with Jack Miller for 13th at the very end.

The MotoGP World Championship continues in Argentina from April 1 -3.