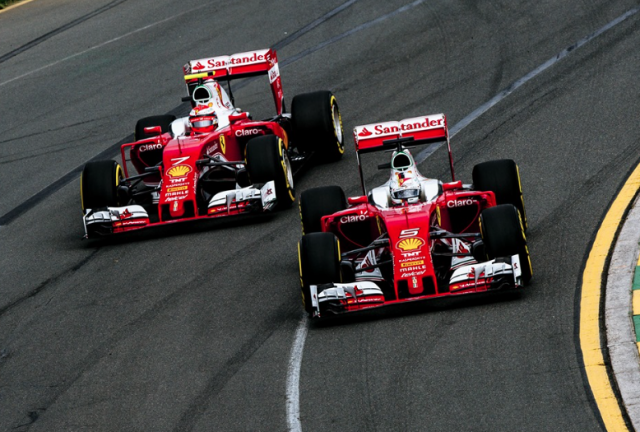 Ferrari took the fight to Mercedes at the Australian Grand Prix

Ferrari boss Maurizio Arrivabene says his team must not dwell on Sunday’s missed opportunity to win the Australian Grand Prix.

The Maranello team appeared in the box seat to kick off the new season with a victory but a wrong strategy call took a possible win away from Sebastian Vettel’s grasp.

Vettel had stunned the Mercedes duo of Lewis Hamilton and Nico Rosberg by storming into an early lead before the race was red flagged on lap 19 due to Fernando Alonso’s horrific crash.

During the stoppage Ferrari elected to keep Vettel on the super-soft tyre, while Mercedes fitted the more durable medium compound to both Rosberg and the recovering Hamilton.

The decision forced Ferrari to pit Vettel again to ensure it completed the mandatory obligation of running two different tyre compounds during the race.

Mercedes, which had already run the super-softs, was able to reach the finish without its cars making another stop.

“We don’t have to give up, we need to continue to push. We have to turn the page and look forward and think about the next one.

“On the (pit) wall we were confident in all honesty, so we looked at the gap we were gaining at that time and our idea was to go with our strategy.

“I don’t want to make any excuses. Red flags are part of the race.

“At that stage of the race we had to be a bit more aggressive. It could be right, it could be wrong.

“At the end we were pushing like hell and Sebastian had the chance to be able to overtake Hamilton (before a small off at Turn 15 with two laps to go).

“If you want to look with the glass not half empty we were there, this is the news. Of course after this you can’t be happy but this is racing.”

Vettel hinted during the post-race conference that his team misjudged the strategy, but Arrivabene is not convinced his squad would have won the race if they utilised the medium tyre.

“We need to look at the data in the garage, because every car has different consumption, different degradation, to be certain if we were right.

“To be certain if we were wrong, is nonsense.”