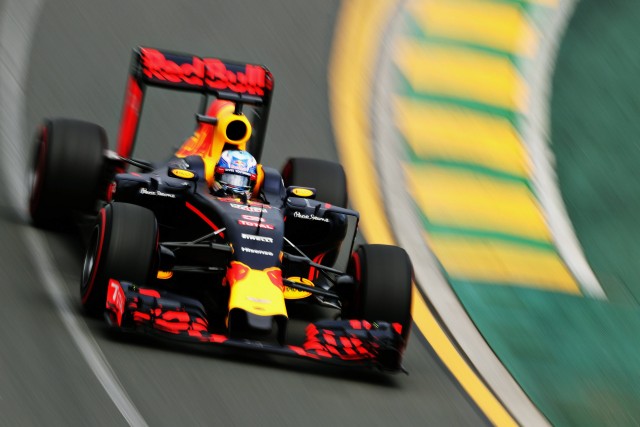 Daniel Ricciardo says Red Bull can take encouragement from his strong performance in the Australian Grand Prix after challenging for a podium finish.

Ricciardo took the flag in fourth to equal the best result for a local driver in the AGP since it became a Formula 1 event in 1985.

A fourth place in 2012 proved Mark Webber’s best AGP finish in 12 starts, while Ricciardo’s previous best had been a sixth recorded 12 months ago.

Starting today’s race in eighth, Ricciardo made strong progress in the early stages, pulling clean passes on the Force India of Nico Hulkenberg and Williams of Felipe Massa.

An early first stop and a decision to remain on the super soft compound tyres saw the Australian up to fourth by the time the red flags flew on lap 19 for Fernando Alonso’s heavy crash.

While running as high as second as the race entered its final third thanks to the retirement of Kimi Raikkonen and a pitstop for Sebastian Vettel, Ricciardo’s chances of a podium disappeared when he was forced to make a final tyre change of his own 16 laps from home.

A subsequent charge in the final stint left the Red Bull driver with the fastest lap of the race, crossing the line 25 seconds behind Vettel’s Ferrari.

“It was so good to be back racing,” Ricciardo smiled post-race.

“I came on the radio more than once to express my joy at just being out there and competing.

“Obviously that joy was emphasised by having a good car underneath me.

“At the start we were able to pick cars off, we had good pace with high fuel on the option (super soft tyres). It was fun being able to pass cars so I was enjoying that.

“Then we were sitting in a podium spot towards the end. I was hoping that the tyres would last but I knew they weren’t really going to hold on for too much longer.

“I knew we had to pit but fourth is still a really good result.”

The red flag had proven the strategic wildcard in the race and saw the front-runners diverge on tyre strategy.

Eventual one-two finishers Nico Rosberg and Lewis Hamilton both went with the medium tyre and raced through to the end, while Vettel went with the super soft and Ricciardo the softs.

Ricciardo said he supported the team’s decision not to try and run through to the end on the mediums.

“I think the start, to go option-option before the red flag was good,” he said of the tyre strategy.

“We were passing cars and having fun, I was definitely having a ball.

“Then on the red flag, for me along with the team we wanted to put that soft tyre on.

“At the time I was happy with that.”

The Australian says he’ll be aiming for top five finishes during the early stages of the season before the arrival of a Renault engine upgrade, which is pencilled in for Canada in June.

“I’m happy that we’re not that far off Mercedes and Ferrari,” he said.

“We’re closer than we expected so it’s a good start. We’re hanging out for this update eventually. But until it comes we can hang in there.”

Ricciardo was Red Bull’s sole hope throughout the race after a mechanical failure ruled team-mate Daniil Kvyat out on the formation lap, which triggered an aborted start.