Mies/Emery victorious in chaotic AGTC round

Mies/Emery victorious in chaotic AGTC round 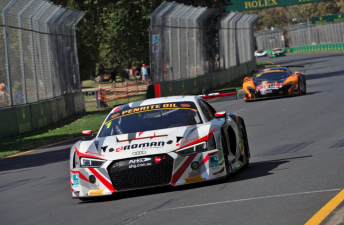 The #1 Audi of Christopher Mies and Geoff Emery

Audi duo Christopher Mies and Geoff Emery emerged as round winners after a shambolic weekend for the Australian GT Championship at Albert Park.

The duo took the chequered flag first, fifth, seventh and 10th across the weekend’s four races, in which they were respectively classified second, sixth, 15th and second once post-race seeding time penalties were applied.

Implementation of the post-race time adjustments, which are usually done through compulsory pitstops, led to a dramatic disconnect between on track battles and final results in each 25 minute race.

The third and fourth races both ended under Safety Car due to accidents, which further shone the spotlight on the bizarre format.

Mercedes driver Matthew Solomon stood atop the podium after leading the field to the chequered flag in today’s Race 4, only to be dumped back to 22nd in the final results due to his time penalty.

Klark Quinn (McLaren) was likewise shuffled from second back to 20th while James Koundouris (Audi), who was 11th across the line, was awarded the win.

The race finished under Safety Car due to a collision between Peter Rullo’s Lamborghini and Andrew MacPherson’s Porsche at Turn 9 that left both cars with significant damage.

The results saw Koundouris and co-driver Marcus Marshall net second for the round ahead of Nathan Morcom, who proved a winner in Race 2.