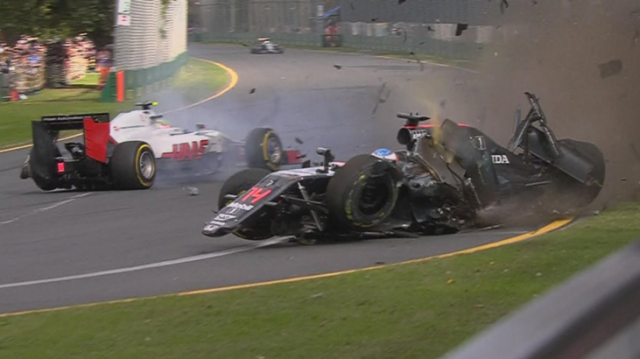 Fernando Alonso heads towards the gravel

Fernando Alonso has walked away from an enormous accident that forced organisers to red flag the Australian Formula 1 Grand Prix.

The Spaniard collided with the rear of Esteban Gutierrez’s Haas on the high-speed run into Turn 3 on lap 17 of 57.

Contact with the left-rear wheel of the Haas sent Alonso into the outside wall, before the car spun into the gravel and performed a series of barrel rolls.

Although the McLaren ended the crash upside down against the barriers, Alonso quickly emerged from the wreck before being taken to the medical centre for precautionary checks.

“It was a big, big crash,” said Alonso after returning to the paddock.

“I tried to take the slipstream of Gutierrez into the braking point and a combination of factors meant that we ended up with a crash.

“I’m thankful for the safety of those cars and that I’m alive, which is the most important thing.”

The race was stopped for 20 minutes while officials cleaned up the wreckage.