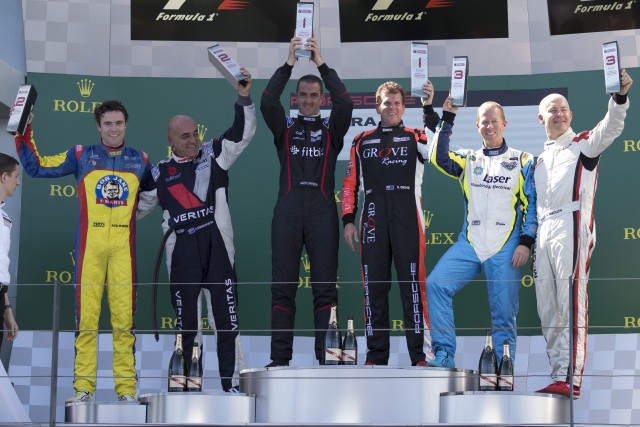 Alex Davison has taken the Carrera Cup round victory with his third win from four races in the final 10-lap encounter at Albert Park.

Like in Race #3, Davison got a great start to head Steve Richards and Nick McBride into the opening turn.

Although Richards pressed in opening laps, Davison soon settled into a groove and he built a handy margin.

The battle for third quickly heated up with Matt Campbell finding his way through on McBride on the opening lap. However, a great seesawing battle soon become the fight for the race with McBride taking back third on the sixth lap. Campbell lost another spot to Ash Walsh one lap later.

Up front Davison was silky smooth notching up his 40th individual race win and first overall round victory since Adelaide in 2012. Overall for the weekend had McBride increasing his points lead in second overall and Richards in third.

“That race was really good as we had used rubber on and I thought that Matt Campbell on fresh tyres would be coming,” said Davison.

“I got a gap, but Richo never let me relax. The crew worked the tyre pressures and the car seemed to get better as the race went on.

“I wasn’t expecting results like this so early in the year as I have only just started working with this crew.

“Qualifying wasn’t great for us starting sixth, but we bounced back pretty quickly and then to have three wins is awesome – I’m rapt.”

In the Tag Heuer Carrera Challenge Stephen Grove led early in the semi-pro category while James Bergmuller tried a late braking lunge on Shane Smollen. As Bergmuller slid sideways he missed both Smollen and Grove and was forced to run across the gravel trap.

One corner later Tony Bates went off the road and was buried in the sand.

Smollen went through to take the race win, but it was Grove who took the overall weekend honours. A popular second overall in the Tag Heuer Carrera Challenge going the way of Adrian Mastronardo with Smollen in third.

“To come and win in Melbourne on the Grand Prix weekend and be on the top step where the Formula One guys will stand is just awesome,” said Grove.

Next for the Carrera Cup is the Rennsport two-driver Pro-Am at Sydney Motorsport Park 29 April to 1 May.