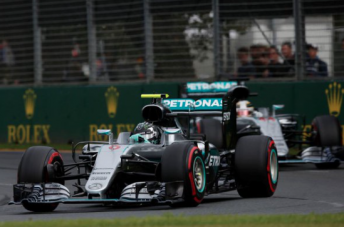 Rosberg found himself in third behind the Ferraris of Sebastian Vettel and Kimi Raikkonen after both he and pole-sitter Lewis Hamilton struggled to get away at the start.

However, an inspired decision to switch to medium tyres under a red flag stoppage following a nasty shunt for McLaren’s Fernando Alonso saw the German overhaul the super-soft shod Vettel as his tyres deteriorated.

In the end, Rosberg went on to take the flag by 8.6s from Hamilton, who used the same strategy as his team-mate to recover from falling to as low as seventh.

Vettel was left to settle for third after a lock-up late in the race halted his charge to pass Hamilton.

Vettel produced a lightening start to split the Mercedes front row and shoot into the lead as team-mate Kimi Raikkonen moved by the slow starting Hamilton and Rosberg.

Hamilton particularly struggled on the opening lap dropping down to sixth, while Vettel quickly opened up a comfortable advantage at the front.

Vettel maintained the lead following the first round of pit stops as Rosberg jumped Raikkonen to claim second.

However, strategies were put on hold when the race was stopped on lap 17 when Alonso was involved in frightening crash with Haas F1’s Esteban Gutierrez.

The double world champion clipped the left rear of the Haas which pitched him into the wall on the run to Turn 3, before being flicked into a roll by the gravel trap.

Alonso came to rest against the barriers before climbing out of the wreckage under his own strength.

After a 20 minute stoppage to clear the debris, racing resumed with Vettel leading Rosberg, Raikkonen and Ricciardo, who made the most of a smart pit strategy.

But Ferrari’s decision to fit super-soft tyres would come to haunt them with the four-time world champion unable to build a gap over the medium tyre shod Rosberg.

Vettel was forced to pit, handing the lead over to Rosberg.

There was even worse news for Ferrari as Raikkonen retired with smoke pouring for the back of his car. A fire then broke out from the air box while in the pits.

Like Vettel, Ricciardo had fitted softer rubber to his Red Bull and after inheriting second he was soon gobbled up by Hamilton and was forced to pit.

The Red Bull man fitted super-soft tyres and a strong final stint saw him pass Massa on his way to fourth.

A fight for the victory looked as though it would break out but Rosberg controlled the pace to take the win from Hamilton and Vettel.

Force India’s Nico Hulkenberg was seventh ahead of Valtteri Bottas (Williams), while the scraping Toro Rosso’s of Carlos Sainz and Max Verstappen completed the top 10.

The pair had made contact in the closing stages of the race when Verstappen slid into the rear of his team-mate.

Red Bull’s Daniil Kvyat failed to make the start after coming to halt on the formation lap.