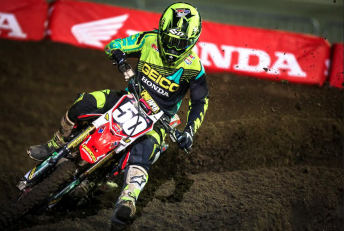 Dungey put in yet another dominant performance aboard his Red Bull KTM, dicing with teammate Marvin Musquin early on in the main event, before earning his sixth win of 2016.

Musquin held second place for the majority of the race, before a minor fall in the closing stages handed second place to Rockstar Energy Husqvarna’s Jason Anderson. Musquin would rebound for third.

Australia’s Chad Reed put in a valiant performance off the back of a DNF in Toronto, notching a fourth place finish in the main event.

Title hopefuls Eli Tomac and Ken Roczen were buried in the pack off the start, and could only recover to a fifth and sixth place respectively by races end.

JGR Yamaha’s Weston Peick put in a solid ride for seventh, followed by the first HRC Honda of Trey Canard in eighth and Mike Alessi in ninth.

Geico Honda’s Justin Bogle rounded out the top ten, with the second HRC Honda of Cole Seely having a tough night in Detroit, managing a lowly eleventh place finish.

In another wild 250cc East Coast main event, Stewart would break away from the chaos behind him and earn his first win of 2016, and take the points lead by virtue.

Privateer Gannon Audette put in a nice ride for sixth, enduring pressure from both RJ Hampshire and Paul Coates, who finished seventh and eighth.

Former points leader Jeremy Martin had a terrible night in Detroit, crashing in the first corner and having to pull into the pits. Martin would finish in 13th position by race end.

Toronto winner Justin Hill did not race the night show in Detroit, following a hard get off in practice that left the Troy Lee Designs KTM rider on the sidelines for round eleven.

Stewart now leads the 250cc East championship with 80 points, followed by Martin with 73 and Plessinger with 67.

The Monster Energy Supercross series now has the Easter weekend off before returning for round 12 in Santa Clara.