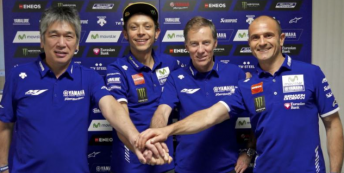 The contract extension will see Rossi compete in motorcycle racing’s top tier until the end of the 2018 campaign.

Rossi rejoined Yamaha in 2013 after a disappointing two-year stint at Ducati.

“I am very happy to announce that Yamaha and I have extended our contract and will continue working together in MotoGP for the next two years,” said Rossi.

“I am very satisfied with this decision, because it has always been my plan to compete in motorsports for as long as I can be competitive and find it enjoyable at the same time.”

Rossi’s team-mate Lorenzo is yet to make a decision on his future with the Japanese manufacturer.