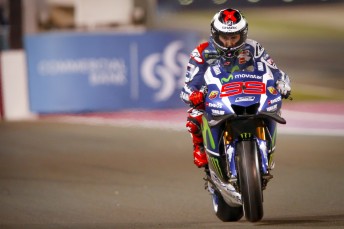 The defending world champion will share an all-Spanish front row of the grid with Honda’s Marc Marquez and Suzuki’s Maverick Viñales.

Lorenzo laid down a 1:54.543s on his first timed lap, and that proved to be good enough as nobody took advantage of his major wobble during the final lap of his session.

“I had a big moment with the second tyre,” admitted the Movistar Yamaha MotoGP rider.

“It looks like tyre was not ready, it was not warm enough, and I lost the rear.”

However, Lorenzo may well have been saved by the bell as Marquez missed out on setting a second lap during his final run by a matter of seconds, a lap which he claims would have delivered pole.

“The funny thing is that on the last lap I didn’t see the (chequered) flag and then I did one more lap pushing 100 percent,” explained the Repsol Honda Team rider.

Marquez instead had to settle for second, having also set his personal best during the his first run.

He also narrowly the avoided the embarrassment of crashing at a practice start, bike #93 lurching violently and running through the gravel at the conclusion of the session.

Andrea Iannone heads up an all-Italian second row after besting Valentino Rossi after the chequered flag, who had done likewise to Andrea Dovizioso.

Jack Miller set only one timed lap during Q2 on his way to 18th on the grid after mechanical issues with his Marc VDS Honda.