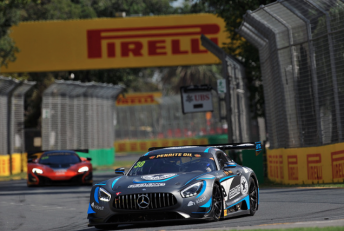 The Eggleston Motorsport driver had secured second spot behind the Aston Martin of Quinn on corrected time, but the latter was excluded from the race for causing a multiple car crash on the opening lap.

Quinn made contact with Roger Lago’s Lamborghini on the exit of Turn 2 which sparked a chain reaction further down the pack.

The race ended under Safety Car with just one full racing lap completed.

Vicious Rumour Racing’s Andrea Montermini took the chequered flag in the new Ferrari 488 GT3 but was demoted to 14th spot once his compulsory pit stop time was added.

The Australian GT Championship returns to action on Sunday for Race 4, which is scheduled to begin at 1135 local time.

Next Story Mies/Emery victorious in chaotic AGTC round