Ricciardo ‘under contract’ to Red Bull for 2017

Ricciardo ‘under contract’ to Red Bull for 2017 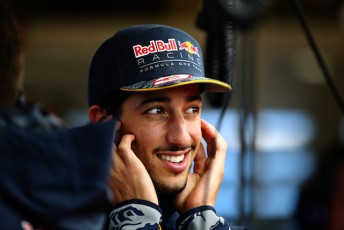 Daniel Ricciardo is happy to stay at Red Bull

Daniel Ricciardo is confident he will stay at Red Bull next year, confirming that he is under an ongoing performance based contract with the energy drinks giant.

The team’s recent struggles have led to speculation that Ricciardo could be on the move next season, with Ferrari a potential target.

Ricciardo responded to the speculation in Thursday’s Albert Park press conference by stressing his commitment to the team and saying that he is “not exactly out of contract”.

When asked directly of the situation on Friday, Red Bull boss Christian Horner stated firmly that Ricciardo is under contract, but declined to elaborate on details of the arrangement.

The ongoing deal is thought to be dependent on the performance of both the team and the driver, in which Red Bull has invested for almost a decade.

Such a scenario will see Red Bull risk losing the young star if it does not live up to its end of the bargain this year.

“If either aren’t performing and particularly if I’m not performing and I have five years on the contract they can say ‘you are not world championship material, we don’t want you’.”

“I am,” Ricciardo continued when asked if he is confident that he will remain at Red Bull.

“I feel what we have got this year will put us in a good place not only for the second part of this year but for next year too.

“If we can prove to ourselves that we can win races next year and challenge for a championship then this is the place I want to be.

“For sure I want to put myself in a winning opportunity but again I’m not looking around because I do feel that we will be better this year and get back to where we should be.

“I think for now, for the short term, I’m pretty locked in but at the same time Red Bull are aware they want to give me a fast car. Let’s say right now my future is pretty stable at Red Bull.”

Horner stressed Red Bull’s need to protect its investment in young drivers as its reason for the long-term, performance-related contracts.

“Red Bull invests in these guys at a young age. They develop them and they give them the opportunity through the Junior team and Toro Rosso,” he said.

“The contractual situation we have with Daniel Ricciardo is extremely clear. (But) how long? That’s confidential.”

Having burst onto the scene in 2014 by scoring three victories on his way to third in the championship, Ricciardo remains hungry to return to the sharp end with Red Bull.

After a 2015 campaign blighted by power unit issues which yielded two podiums finishes, Red Bull has made progress in the off-season but remains adrift of the pace-setting Mercedes and Ferrari.

While confident Red Bull will begin to rise again this year, he admits there is pressure on the team to deliver results to keep both him and Red Bull owner Dietrich Mateschitz happy.

“I think so,” he said of the team being under pressure.

“Not only for my sake but for them as a team and a brand. They really want to get back to the front.

“I know (Dietrich) Mateschitz is a keen competitor and he is putting in a lot money into this project to be successful.

“For us to have another year of fourth in the constructors I don’t think will be on the cards for us. It won’t suffice anyones needs or satisfactions. We need to get that top three in the championship.”

Switching his focus back to this weekend’s Albert Park curtain raiser the Perth native is realistic on the team’s expectations.

“This year we have to keep building from there (2015) and not expect the world in the first few races,” added Ricciardo.

“It sucks saying top eight is realistic. I’d love to say I can be on the podium but it is not quite realistic for now.

“We are just going to play it cool and sure if the opportunity is in front of me then if I can win there race on Sunday then I will.”