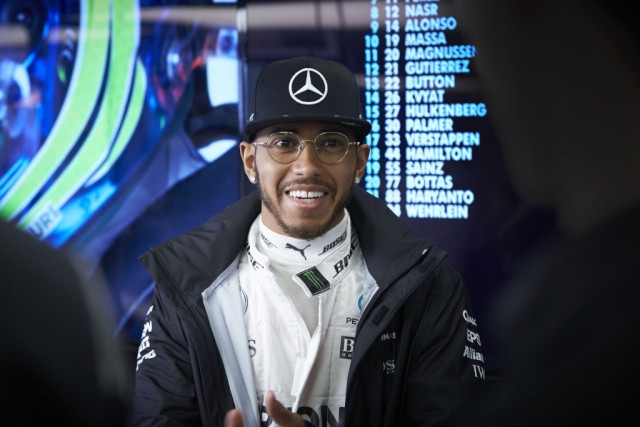 The Mercedes driver was guaranteed pole well ahead of the chequered flag as nearest rivals Sebastian Vettel, Kimi Raikkonen and Nico Rosberg decided to pit early, ending the session in their garages.

While qualifying ended in an anti-climactic fashion Hamilton posted an impressive 1:23.837s to claim his 50th career pole position.

Rosberg was unable to match his team-mate with the German’s only effort. on the super-soft tyres, 0.4s adrift.

The Ferraris of Vettel and Raikkonen will share the second row after deciding to end their qualifying stints well before they were eliminated in order to save tyres for the race.

Red Bull’s Daniel Ricciardo will start from eighth having been the first driver eliminated from the final segment of qualifying.

Sauber’s Sergio Perez and Force India’s Nico Hulkenberg completes the top 10 after falling in the closing stages of Q2 eliminations.

Valtteri Bottas was another to succumb in Q2, leaving him to start from P11 ahead of the McLaren duo of Fernando Alonso and Jenson Button.

Both Renaults made it through to Q2 with debutant Jolyon Palmer out-qualifying Kevin Magnussen in 14th position.

The highest profile exit in Q1 was the Red Bull of Daniil Kvyat, who will start in 18th position.

He was joined by the Saubers of Felipe Nasr, Marcus Ercisson, the Haas F1 pair of Romain Grosjean and Esteban Gutierrez and the two Manors.

Rio Haryanto will start from the back of the grid after being handed a three place grid penalty for a collision with Grosjean in third practice.