Petrucci to sit out MotoGP opener 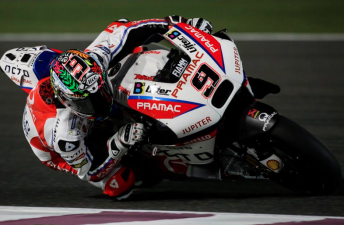 Pramac Ducati’s Danilo Petrucci has withdrawn from this weekend MotoGP season opener in Qatar due to injuries sustained in a testing crash at Phillip Island.

The Italian sustained broken bones in his right hand following a high speed crash at the Victorian circuit last month which forced him to sit out the following Qatar test.

Petrucci travelled to the Losail International Circuit this weekend to contest the opening round where he took part in Friday practice.

However a further X-ray has revealed “dislocated bone segment” which will force him out of this weekend’s meeting.

“After the end of the practice, an X-ray follow-up highlighted a dislocated bone segment of the third metacarpal of his right hand. A problem that will force Petrucci to miss the opening race.”

Pramac Ducati is yet to announce a replacement rider for the remainder of the weekend.

Michele Pirro would be among the contenders having filled in for Petrucci at the final pre-season test.