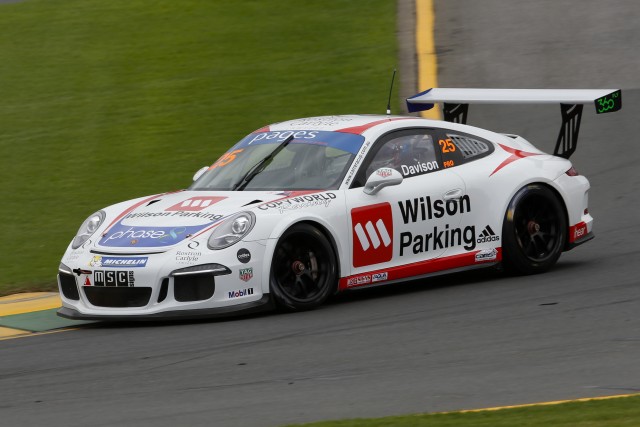 Alex Davison has backed-up to score his second race win of the weekend in the Carrera Cup at Albert Park.

After finishing first under Safety Car conditions yesterday, it was a more conventional victory today, despite an early SC period.

Davison got away best from pole and headed Steve Richards, Nick McBride and Matt Campbell into the opening turn.

Bates was able to continue, while all the others were out with damage.

Following the Safety Car to clean-up the Turn 1 incident, Davison quickly pulled a handy lead at the front of the pack which he held through to the finish of the 10-lap race

“Very satisfying as although I got the win yesterday, this one felt more like a proper race victory,” said Davison.

“It was great to dominate from start to finish and our pace was clearly the class of the field.

“I’m rapt to be racing again in this series. The last couple of years have been tough. I mean you see everyone else getting further ahead and believe me you don’t improve by sitting on the couch.

“So to be back racing Carrera Cup is awesome and to get that first proper race win is fantastic.”

After being involved in an opening lap incident in Race 1 on Thursday, Ash Walsh continued his comeback to make his way up to sixth and push Michael Almond over the closing laps.

Down the order, the best battle of the race was between the contenders in the Tag Heuer Carrera Challenge.

After talking the chequered flag yesterday, Stephen Grove was involved in a race-long fight with James Bergmuller, Tony Bates and Adrian Mastronardo.

Grove battled not only his competition, but also a flat-spotted tyre after a first lap skirmish with Garth Walden.

Grove held for the win in the semi-professional category from Bergmuller, while Bates and Mastronardo made contact on the final corner. Mastronardo home in third as the race ended.

“Early on I got hit by Garth Walden, which was just a racing incident, but it flat-spotted the tyre, so I had a vibration the whole race.

“I was holding on for dear life, especially in the high-speed stuff where the rear wanted to let go. But I had to stay on the gas as the others were all there.

“That was a hard race and I’m really pleased to come through out front.”

The final race of the weekend in the Carrera Cup will be run on Sunday as the curtain raiser to the Formula One Grand Prix; getting underway at 1.50pm.