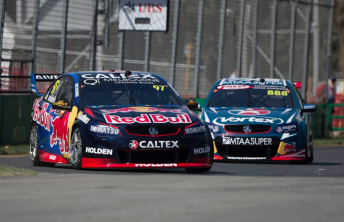 Shane van Gisbergen took his second victory of the day as he led Triple Eight to its first one-two-three finish in Race 2 at Albert Park.

The Kiwi led every one of the 12 laps, easing away from fellow front-row starter Jamie Whincup from the outset.

Whincup spent the bulk of the contest fending off Craig Lowndes, who eventually took second with a bold inside lunge at Turn 13 on the final lap.

Lowndes had methodically moved his way forward from seventh on the grid in the Caltex sponsored third Triple Eight entry.

He leapt from fifth to third in one move mid-race as Chaz Mostert speared off at Turn 1 while Lowndes was passing Fabian Coulthard.

Coulthard fended off the recovering Mostert in the closing stages to secure fourth ahead of the Supercheap Ford.

Garth Tander likewise held out James Courtney to secure sixth after an intense battle between the Holden Racing Team team-mates.

Heading in the other direction was Scott Pye, who after starting fifth was shuffled back to ninth on the opening lap.

The DJR Team Penske driver then locked a tyre into Turn 1 on the following lap, spearing through the gravel on the way to an eventual 17th place finish.

The race was run in largely dry conditions, although a mid-race shower at the back of the circuit added to the difficulty for the drivers.

Turn 1 provided its usual action, with Andre Heimgartner this time spun around after a three-wide squeeze with David Reynolds and Tim Blanchard.

The third V8 Supercars race of the weekend will get underway at 1520 local time tomorrow.