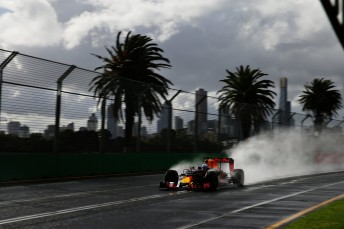 Daniel Ricciardo declared himself content with the opening day of practice at Albert Park despite mixed conditions leaving few clues as to the true competitive order.

The Red Bull driver was third and fourth in the respective 90 minute sessions, both of which were hit by intermittent showers.

Teams will have a final 60 minute session to complete their practice programs tomorrow ahead of qualifying.

“The conditions meant we didn’t do much constant running,” said Ricciardo of his day.

“I think tomorrow is going to be a little bit of a mixed bag for everyone, but it’s cool.

“The laps we did, I was pretty happy. I think the car is in a decent place, so roll on tomorrow and we’ll see where we end up.

“We’ve got some unanswered questions for tonight, but I think tomorrow we’ll answer them.”

Ricciardo’s only miscue was an off at Turn 12 as the rain intensified in the final minutes of Practice 1 which left the Australian to finish the session in the gravel trap.

“That was all planned,” he smiled.

“They were stoked. They didn’t think I’d pull through with it but I did.

“The car was fine. There was a bit of gravel (to clean out), but the mechanics love it. It was all good.”

Ricciardo is optimistic that the combination of Melbourne’s fickle weather and a new knockout qualifying system can help Red Bull knock-off a couple of the more fancied runners.

“Any time you’re not the best team you think any change can help, you’ve got less to lose,” he said.

“I think today with conditions like that and going into an interesting qualifying format tomorrow, it could be an opportunity for us.

“Hopefully we can sneak a couple of rows further up than what we could in other conditions.”