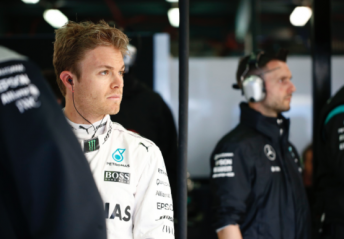 Nico Rosberg has admitted fault for his crash in Friday practice for the Australian Grand Prix.

The Mercedes driver lost control and hit the wall at Turn 7 during a rain affected second session which saw his day end prematurely.

Rosberg says he misjudged the amount of throttle required for the tricky wet conditions resulting in his W07 sustaining significant damage to the front end.

“That wasn’t a good start to the weekend for me. It was very wet out there, which made it tricky. It’s a shame that I lost the car in P2,” said Rosberg.

“I just applied a little too much throttle through Turn 7, spun round and touched the wall.

“My front wing was quite damaged, so unfortunately the boys will have some extra work to do tonight. My apologies go to them and a big thank you for their hard work. “I’m now looking forwards towards qualifying and the race to put in a better performance.”

Mercedes has replaced parts on Rosberg’s car as a precaution following the incident.

“The front wing was damaged and we’ve replaced the left front corner as a precaution – but nothing that will affect him over the rest of the weekend.”

While Rosberg endured a challenging day, team-mate Lewis Hamilton topped the two 90 minute sessions, which were both plagued by intermittent showers.

“The car performed well and although we didn’t get a huge number of laps in, they were still quite constructive sessions,” said Hamilton.

“I was lucky to get a couple of dry laps to get a tiny feeling for what the balance is like around here, which was down to some good work from the team to time my runs right.”

With dry running limited to a premium, Saturday morning’s third practice will be crucial to prepare for qualifying and Sunday’s race.

“We have a lot of work to do in FP3 tomorrow to prepare for qualifying and the race – but it’s the same for everybody,” added Lowe.

“We’re looking forward to seeing how it all plays out and hoping for some dry weather.”

Saturday’s third practice is scheduled to begin at 1400 local time.