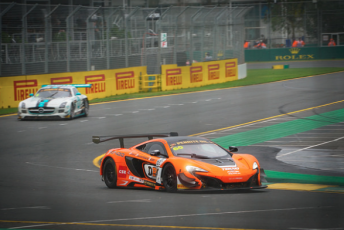 Nathan Morcom on his way to victory in Race 2

The McLaren driver crossed the finish line in second but was awarded the victory once compulsory pit stop times were added post race, which denied Benny Simonsen from scoring a first win for the new Ferrari 488 GT3.

Simonsen had led the majority of the race but the Dane saw his comfortable lead vanish when he ran wide at Turn 15 in the closing stages as rain fell.

As a result of the added race times, Simonsen was demoted to third, while the McLaren of Klark Quinn, which finished third on the road, was promoted to second.

Morcom, Simonsen, Barbour and Denyer had all elected to start on slicks; a decision that proved a masterstroke as the majority of the pack pitted at the end of the sighting lap to change to the dry rubber.

Scott Taylor, Peter Edwards and Max Twigg were among those to remain on their wets, featuring early before falling back through the pack as the track dried.

Geoff Emery managed to bring the Melbourne Performance Centre Audi R8 to the flag in sixth, with the Waltec Motorsport Porsche GT3R of Aaron Tebb in seventh.

The Aston Martin of Andrew Miedecke was seventh, while Roger Lago (Lamborghini) and Tony Quinn in his new Aston Martin rounded out the top 10.