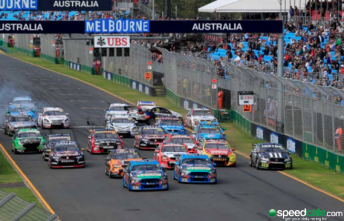 Carnage at the start of last year’s Sunday race

V8 Supercars has made a last minute change to its rolling start procedure for Albert Park following concerns of a repeat of last year’s carnage.

This year will see all drivers allowed to accelerate once the red lights above the startline are extinguished.

The previous system requiring drivers to wait for the pole-sitter to accelerate inside a specified ‘AZ zone’ was blamed for a multi-car accident 12 months ago.

V8 Supercars has changed the rule following feedback from drivers ahead of today’s opening race.

Among those to express support for the move includes qualifying pace-setter Jamie Whincup.

“Even though I’m in a good position to control the start I’m all for having the red light to start the race,” Whincup told Speedcafe.com’s in the post-qualifying press conference.

“Everyone can see the light and go at the same time.”

Prodrive was at the centre of the start controversy last year, with pole-sitter Mark Winterbottom’s tactic of waiting until the last moment to accelerate raising the ire of rivals.

The strategy caught out Winterbottom’s own team-mate Andre Heimgartner, who triggered the multi-car accident when he jumped early in anticipation of the start.

Winterbottom says that smart driving, rather than a new start procedure, is required to avoid more chaos.

“The guys that are crashing are trying to take the piss on the starts,” he said.

“There was a bit of a drama (last year) when Andre went really early, but everyone is trying to get an advantage.

“If you qualify 10th and go into Turn 1 trying to be fourth, stuff is going to go wrong.

“I didn’t think it was that bad, but you just deal with the rules.

“If you try and make spots aggressively then expect the worst, which is what happened last year.”

All four races will feature rolling starts this weekend.

The starting order for Races 2 and 3 will be determined by the results of Races 1 and 2 respectively, while cumulative points from the opening three heats will be used for the starting order of the final.