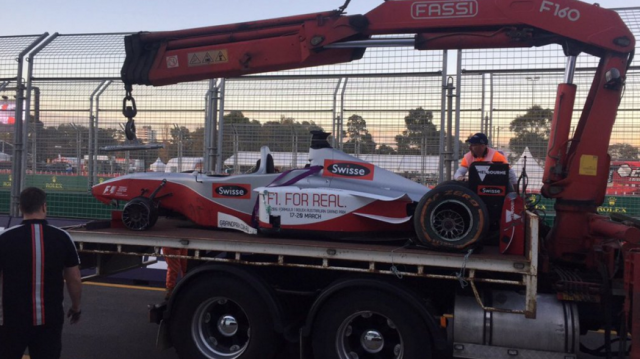 The Minardi after its accident. pic: @cstanaway

Television journalist Clint Stanaway and driver Cameron McConville were both thankful to escape uninjured from a high-speed crash aboard a Minardi two-seater Formula 1 car at Albert Park.

A suspected mechanical failure pitched the duo into the outside wall on the entry to Turn 13 during a Thursday morning ride session for Paul Stoddart’s pair of 750bhp Cosworth V10 powered Minardis. Originally built in 2001, the McConville and Zsolt Baumgartner driven two-seaters have been regulars at the Australian Grand Prix during recent years, taking sponsors, media and special guests for laps of the 5.4km venue.

“We were somewhere between 200km/h and 220km/h heading into the right-hander at Turn 13 and the car went left, straight into the wall,” Nine Network journalist Stanaway told Speedcafe.com of the incident.

“It was terrifying. We hit the wall twice and that was it. It all happened pretty quickly, but it also seemed to happen in slow motion.

“Cam was sensational. He was panic free, went about his business of getting me out of the car and really made me the priority.”

Impressively, Stanaway accepted an invitation for a second attempt at a ride in the sister car later that morning after being cleared of injury by medical staff.

“Cam and Paul pulled me aside and said ‘you’ve only had half the experience so you’ll have to go again’,” said Stanaway.

“I must admit I was a little bit apprehensive, but I climbed back in and I’m really glad I did it.”

McConville is convinced that part of the car’s rear suspension broke when he touched the brakes, but admits that finding the fault is unlikely due to the damage from the contact with the concrete.

The crash occurred on the first lap of the weekend for the car, which along with its sister machine is based in the United Kingdom and dispatched to Australia specifically for the Albert Park running. “At this stage we don’t know what happened because there’s so much damage to the suspension, you can’t tell if it was before or after the fact,” McConville told Speedcafe.com.

“All I can say is that I’ve done 150 plus rides over the last seven years with the car and I’ve never even gone off the road.

“I braked in the normal spot and it just snapped completely left. I didn’t even get a chance to clear the brake, it just went in so quickly.

“Personally I strongly feel that something broke in the rear, but it’s just lucky that Clint was ok and we could carry on with the spare car.

“Part of me feels grateful that it was a relatively young, fit guy in the back.”

The former V8 Supercars race winner had initially thought he had broken his thumb in the incident.

“Because of the angle when it turned so violently, my thumb got caught in the wheel and I thought it’d broken it, but I had an x-ray yesterday and it was all good,” he said.

McConville completed the remainder of his ride duties on Thursday, as well as driving in the three-car speed comparison and racing for Maranello in the opening Australian GT Championship heat.

The Minardi crash was meanwhile Stanaway’s second on track incident at Albert Park, having been involved in a collision with television presenter Rachael Finch during the Celebrity Challenge two years ago

“It’s fair to say that Albert Park isn’t my best friend because I’ve got a bit of a chequered history with the place,” said Stanaway.

“(AGP Corporation CEO) Andrew Westacott said to me that he’s always guaranteed a bit of entertainment when I’m on the track!”

Despite a prang, I had a ripper time in the Swisse 2-seater. Cam McConville & @ausgrandprix safety team outstanding pic.twitter.com/iDO2Ob76Xw