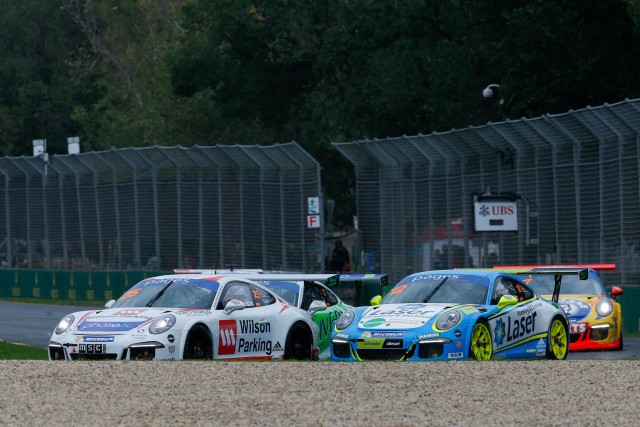 Alex Davison has scored his first win in the Carrera Cup since 2012 with a masterful drive in slippery conditions at Albert Park.

With the scheduled 10 lap race featuring two separate brief rain showers, all the drivers were kept on their toes as the battle at the front saw three separate leaders.

Championship leader Nick McBride got the jump at the start from Race 1 winner Matt Campbell, while Davison quickly moved up from fourth on the grid.

Davison found himself in second, before Campbell made the most of the first shower on Lap 3 to move back into second and then the lead one lap later.

Also moving up in the slippery conditions was Steve Richards in fourth as the top nine cars were nose to tail.

After finishing third in the opening race, Dean Fiore was sitting in sixth when he went for a wild spin. He didn’t hit anything, but dropped to the rear of the field.

The race looked set to go the way of Campbell when another shower right at the Turn 1 chicane on Lap 7 saw the young Queenslander and McBride slide through the gravel trap. Both Davison and Richards kept it on the track and got through heading into Turn 3.

That shower caught out Tag Heuer Carrera Challenge driver James Bergmuller, who went deep into the sand at the chicane. Officials bringing out the safety car through to the completion of the race.

For Davison his 38th career win was far from easy in the conditions.

“I’ll take it any way that I can get it,” said Davison.

“It’s great to get one on the scorecard for my first year back. To be honest I am feeling the rustiness after a couple of years away, especially in those types of conditions. So I am glad to have really kept it all together.

“At the start I was sure we’d get the race in before the rain, but then we had conditions which I really hate with wet on one corner and dry on the next.

“Matt Campbell made the most of the first shower of rain. Then the second I saw the rain come and I did brake early which kept me on the track and I got the lead and stayed out front when it mattered.”

In the Tag Heuer Carrera Challenge Stephen Grove snapped the four-race winning streak of Tony Bates to score victory in the semi-professional category.

“I knew that I had to make my move early and after a good start I got ahead of Tony Bates, but I had to keep my head down as the conditions were so tricky,” said Grove.

“As soon as you saw any spot of rain the track turned slippery straight away. So braking markers and your lines were out the window and you didn’t know what to expect.”

The third of four races for the Carrera Cup will be held on Saturday at 1245 local time.