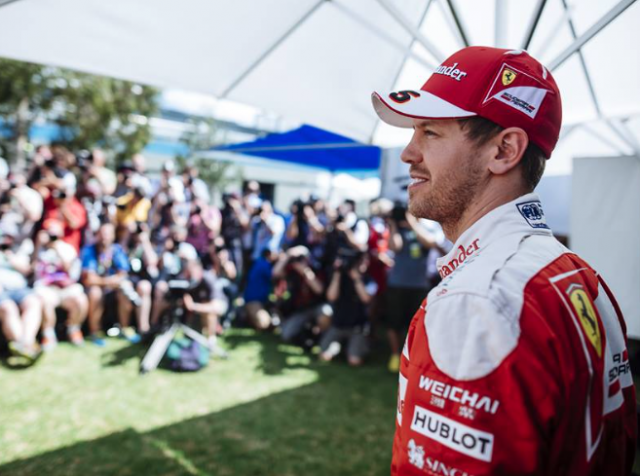 Sebastian Vettel is confident Ferrari has closed the gap to Mercedes

Albert Park is primed to see whether Ferrari has closed the gap to Mercedes when the new Formula 1 season begins in earnest today.

There has been plenty of talk heading into the traditional Melbourne curtain raiser following an impressive pre-season from the respective Maranello and Brackley operations.

Mercedes heads into today’s first of two 90 minute practice sessions in ominous form having clocked significantly more mileage in testing than any other team.

The reigning world champions declined to show their true form in Barcelona having elected against short performance runs on softer compound tyres.

By contrast, Ferrari topped five of the eight test days as the Maranello squad showcased an improved SF-16H, which it hopes will take the fight to Mercedes this season.

After two years of Mercedes dominance, Ferrari driver and four-time world champion Sebastian Vettel is confident the gap to the Silver Arrows has been closed, but admits the extent will be revealed this weekend.

“I think we have (closed the gap),” said Vettel at Albert Park ahead of practice.

“Obviously, the question is whether we are ready in time, but we are on a good track, we are making progress, we did so last year.

“I think we did a step over the winter, but whether it’s big enough or not I think we need to wait for the first couple of races and see.

“I think Mercedes are the favourites going in, they seem to be very reliable but also very quick in Barcelona. I think we are closer than last year, especially in the race.

“We know that our challenge is very, very big, we know that Mercedes in the last two years have built a very, very strong and solid platform for the whole package.

“Not just the engine but also the car has been very, very strong, in particular last year, and I think it is quite difficult to start the next season with a worse car than you had before.

“So we know the bar is high, but we’re pushing, pushing very hard.”

Despite a strong pre-season, Hamilton believes Ferrari has made sizeable gains over the off-season and will have an answer to Mercedes’ pace at Albert Park.

It appears much of Ferrari’s improvement has come on the power unit side after the FIA confirmed the Scuderia has spent 23 of its 32 engine development tokens.

“I think this year that the whole pack looks like it’s a little bit closer but personally I think that they’ve got something up their sleeve this weekend,” said Hamilton.

“I think Ferrari are going to be a lot closer than they talk about. (They’re) arriving on a low but going to deliver high.”

Melbourne’s seasonal weather could mask the grid’s ultimate pace with forecasts predicting showers during the morning and afternoon.

The opening practice session of the new F1 season is scheduled to begin at 1230 local time.