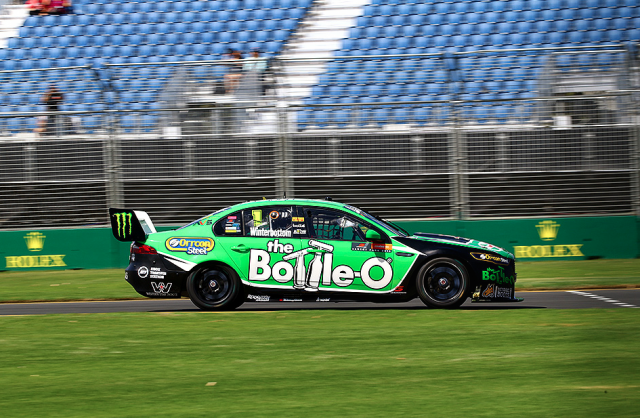 Mark Winterbottom kept Prodrive on top as the pace quickened in second practice for the V8 Supercars at Albert Park.

The second 30 minute session prior to qualifying concluded with a flurry of fast times as drivers moved from their pre-marked tyres to new soft compound rubber.

A 1:58.0s had Scott Pye on top ahead of the final minutes, which saw Rick Kelly, Chaz Mostert, Shane van Gisbergen and Winterbottom move to the top of the order in quick succession.

“We made a big improvement from the first outing,” smiled Winterbottom.

“This track is awesome, you’re just trying to hang on around these big corners.”

Kelly ended up fourth ahead of Cameron Waters and Fabian Coulthard, who ensured four of the six Falcons ended up in the top six.

The FG X Fords dominated at Albert Park last year, scoring one-two finishes in every race in the hands of Prodrive’s Winterbottom and Mostert.

Will Davison ended up 14th having found the concrete late in the going aboard his Tekno Holden.

The former Erebus driver lost control through the high-speed Turn 8, resulting in the left-rear of his Commodore make significant contact with the concrete.

Davison drove the car back to the pits, where the team will have an hour to fix the damage prior to qualifying at 1650 local time.